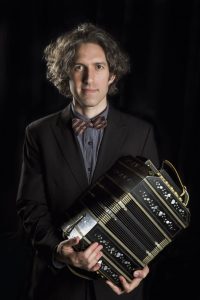 Ben Bogart is an active professional musician performing more than 100 shows each year. Though he specializes in Jazz Saxophone performance and instruction, Ben appears on the Silicon Wakes Up album on the Bandoneón. He currently lives in Buenos Aires and performs with the Orquesta Escuela de Tango de Emilo Balcarce.

Ben’s performance on Four Feet In The Jungle are actually from an older recording session we did for the Down The Doors album. We had so much material to work with, I took some alternate takes and built this new song out of them.

His website contains all of his various musical projects at benbogart.com.