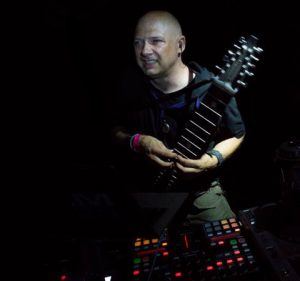 Boom is a fixture in the SF Bay alternative-culture music scene. He has performed across North America at clubs, festivals and other events on the east and west coasts. His instrument of choice is a modified 10-string Chapman Stick, giving him amazing range out of a single instrument.

Ryan was introduced to Boom via a mutual friend, and came into the studio for a jam session. He ended up laying down a bass track for Memories Are Real, a song on the Silicon Wakes Up album. You can expect to hear more of Boom on future Chance’s End songs, as the same jam session led to other ideas for future tracks.

Catch Boom live around San Francisco, or on his website at boomhuman.com.