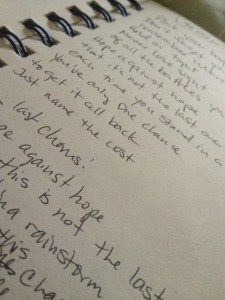 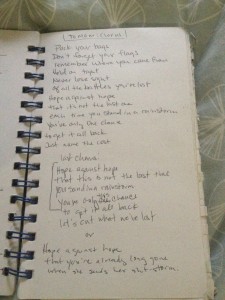 Those of you who have heard the latest Chance’s End album “Down The Doors” will be very familiar with my music partner Emily Zisman. Her voice graces the majority of the album and she sings regularly with me when we perform live for audiences. What you may not know is that Emily Zisman is a very accomplished songwriter in her own right. She has been writing folk-Americana songs her whole life, but like many songwriters her focus is on the live moment rather than the studio.

So over the last couple of years, I have had the opportunity to produce and mix my music partner’s latest folk album “Weeds & Wildflowers”. Since I often accompany Emily on my violin when she is performing her music, I have been able to hear some of these songs from their very first seeds. In many cases, I took part in helping guide them from idea to completion.

Throughout this process, I was able to take a step back and really think about how to produce a song from idea to finished product. I wanted to share 5 tips that I found essential at different stages of the process.

1. Get an early draft recorded ASAP

When you are first developing a song idea, you never know where inspiration will strike. You may be out on the porch, in a car, in a hotel, or even in bed. But you are probably not in the studio. If you’re like me, you think to yourself “this is a great idea, I’ll remember it for when I get into the studio”. Bzzzt! Wrong answer!

Of course, as soon as you get into the studio and start your recording rig, about half the time I guarantee that you’ll have forgotten the exact way you were playing something that made it so compelling (if you even remember what the idea was in the first place). So you’ve got to get that idea down ASAP.

Of course you should be writing down lyrics on paper (or on the computer) rather than trying to remember them. But now that the majority of us all carry smartphones with us, there is zero excuse for not recording audio when inspiration hits. Start up your Recorder app on your phone, and get that idea down in whatever way you have. No matter if the background noise is so bad that you can hardly hear yourself, or you don’t even have your instrument with you and have to hum everything. You’ll be glad that you have something recording your mental state.

And what if you go back and listen to your recording and cringe in horror? When you review your notes, maybe you realize how drunk you were when you recorded it and now all you hear is a mess. Well then it’s a good thing you were able to prove to yourself that the idea was no good to begin with, rather than beating yourself up over forgetting that “amazing idea” that you had late one night and promptly forgot the next day.

So you’ve got your lyrics down on paper, your ideas recorded in your smartphone, and you’ve even taken a quick pass at recording the song basics in your workstation. What now? Now, you need to put on your objective hat and really figure out what aspect of the song is working, and what isn’t. You don’t really believe that the first idea you have is always gold, do you? If so, then take a reality check and realize that absolutely zero hit songs were first written down in the final version you know and love. Even those rare stories of musicians writing their hit song in 15 minutes, went through a couple of revisions during recording or editing.

Whether it’s polishing up the form for radio length, making the hook catchier, changing awkward/difficult stanzas, or even just clarifying phrases that aren’t quite capturing the feeling you want, you should be willing to change any part of the song.

Why should you rewrite it soon? Because if you let the draft version of a song sit for too long, then it will become ingrained in your mind and any change will be perceived as a “bad” change even if it will dramatically improve the song from the audience’s perspective.

Let’s say you have done rewrites and are starting to get the recorded song in a form you’re happy with. Now is not the time to wrap things up. I recommend spending a decent effort investigating production alternatives.

What if the choruses repeated? What if there was a solo here? What if another instrument was used in place? At this point, failure is a good thing because it means you’re trying to reach out of your comfort zone into new territory. I think it’s much more exciting to do something new that could potentially fall flat, then to stick with the safe and trusted production patterns that you’ve probably fallen into without realizing it.

So now you’ve investigated (and possibly kept) several alternatives and are happy with the arrangement. Are you done? NO!!

Put the computer away and go do something else.

What to do? Anything! Go play a gig. Go to a concert. Go take a walk outside. Sleep. Anything except listen (or even think) about your song. You need to come back to it from as blank a slate as possible. How does the song REALLY sound to someone other than yourself? Does the song really have the performance you’re expecting? Does it sound too full with elements, or not full enough?

There’s nothing wrong with saying at this point, “wow, this is just not working for me anymore.” That’s a sign of honesty and self-recognition, and it’s a great trait to have if you’re self-releasing.

But assuming that you are in fact still happy with everything you’ve heard. That leads to the final tip.

I’m coming at this from a DIY standpoint assuming you’re also going to mix your own material. If you will be sending things off to a mix engineer, then by all means send it immediately after you’ve finished arranging.

You often say that the new indie musician has to wear a bunch of different hats. So I recommend truly separating the roles. Unless you’ve got a tight deadline and something just HAS to be finished today, give it another day before mixing. Work on another song. The idea is when you mix a song, you should be hearing that song for the first time that day. You need to reset your mental model of the song so that you can truly hear it as audio elements as they stand now, rather than carry the weight of the design decisions that got you to that stage.

Do what the pros do: Get rid of any compression/EQ/reverb that does not play a creative element in the mix. Normalize all of your faders. Start from square one, and actually mix the song as a separate process. Find the frequencies that conflict between two elements, and fix them. Boost the dynamics of parts where needed. But make sure you’re attacking it objectively from an outside perspective.

Once you’re finished mixing, I like to sit on it once more so that I can listen again from the listener’s perspective, to see if everything I intended is actually there. Ear fatigue is a very real phenomenon, and it has caused many a mix to suffer at the end of a long mixing session.

Those are 5 very broad tips I find myself using when producing for others. These same tips of course apply when producing one’s own material as well. Though it does get much more difficult to remain objective with your own songs. So in those cases, I like to ask other musician friends for feedback at the end of various steps. Musicians should understand what to look for in a demo, and should hopefully know what needs to be fixed before mixing. A good musician friend will also be willing to tell you straight up if something is not working, while a friend, family member, or even a fan will usually only give you positive reinforcement (which is great to have, but not when you need actual helpful feedback).

Good luck with your productions!